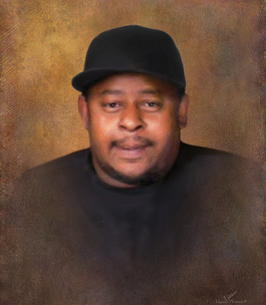 Sylvester Mountierre Ware, 53 years of age, of Pampa, Texas, drew his last breath in the morning hours of Friday, October 1, 2021, in Lubbock, Texas. He was one of 11 children born on Saint Patrick’s Day, March 17, 1968, in Boswell, Oklahoma to Homer Dean and Elaine Ware.

After attending and graduating Boswell schools in 1987, he moved to Pampa in 1991, and on March 14, 2004, he married Sandy Hunicutt at Macedonia Baptist Church. Sylvester began his career as a cook at Dos Caballeros and through the years he’s cooked at numerous establishments such as KFC, Pampa Nursing Center, Pampa Junior High, Meredith House and then most recently Pampa Regional Medical Center until his forced retirement due to health issues. In 2016, Sylvester had open heart surgery and had an LVAD (Left Ventricular Assist Device) placed in to help his failing heart.

Following his surgery and making some necessary adjustments to his daily routines, he began to watch old westerns on TV and playing spades on his phone. His football team of choice was the Green Bay Packers; however, he would root for any team playing against the Dallas Cowboys (just to antagonize Sandy and Shinyse). Sylvester was known to be pretty head strong and quite the straight shooter, but he never passed up on a good time either. He loved to go out and hang with his friends “under the tree” and even have a drink or two, but he was very responsible and always made sure to handle the important things before having his fun.

In keeping with Sylvester’s wishes, cremation will follow his visitation and there will be no funeral services. The family has entrusted the cremation care of their loved one to Winegeart Funeral Home.