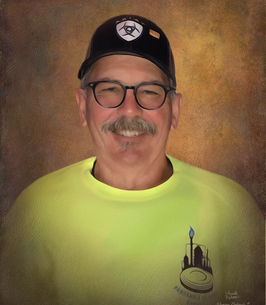 Mark Rice “BooBoo” Gibson, taken too soon at the age of 67, began his journey to Paradise on June 19, 2022, after a long struggle with cancer. He was born on August 26, 1954, to Bill and Jean Gibson in Liberal, Kansas.
Mark was reared in Hooker and graduated from Hooker High with the class of ‘72’. Following graduation, Mark dove headfirst into the workforce in the oil and gas industry. He was employed by various companies over the years; however, he never left one job without having another venture lined up and ready to transition into. He was a very devoted and hardworking man that, unfortunately, was forced into early retirement due to his illness.
True to his laid-back manner, he could be found quietly observing events happening around him, and being a man of few words, would only interject when needed and it was quite often straight to the point! When not working, Mark liked to hunt and fish, not to mention, he was a bit of a gun enthusiast. He loved taking his grandkids to the gun range and felt it extremely important to teach them both respect and safety for firearms. As the grandkids got old enough to participate, Mark was excited to share his passions with them and was filled with anticipation of being able to take Jett and Kai fishing!
Family life was Mark’s priority. He married his sweetheart, Jan Scoggins, on July 27, 1973, in Tyrone, Oklahoma and that began their 49-year adventure together. As their family grew, you could find Mark rooting them on at all their sporting events – he was even Jada’s biggest fan as she danced on the Tascosa Belles team and never missed Jett play basketball for the Pampa Harvesters. Mark aways thought having kids was great, then he had grandkids and that was just the ultimate, but great-grands, well, there was just nothing better! His love and devotion to his family (especially his grandkids and great-grandkids) gave him the fuel and strength needed to fight back cancer for as long as possible. He will be remembered as having a warm handshake and welcoming smile as he volunteered as a door greeter at First Baptist Church, a loyal friend and ever supportive husband, dad and BooBoo (lovingly bestowed upon him by his precious grandchildren).
Preceding Mark in death were his parents, Bill and Jean Gibson; maternal grandparents, Harold Augustus Hazel and Velma Louise Gormly; paternal grandparents, General Rice Gibson and Winnie Gladys Bray, and a brother-in-law, Danny Shipley.
Those left behind to remember him are his wife, Jan Gibson of the home; son, Ryan Gibson of Denton; daughter, Erika Gibson of Amarillo; four grandchildren, Jett Gibson and wife Brianna of Amarillo, Jada Gibson of Canyon, Keagan Gibson and Camilla Gibson both of Flower Mound; two great-grandchildren, Jett Mark Gibson and Kai Rain Gibson both of Amarillo. He also leaves behind three siblings, Gail Shipley of Hooker, Oklahoma, Susan Ford and husband Martin of Bartlesville, Oklahoma, Tracy Gibson and wife Margaret of Pampa; sister-in-law, Patsy Calkins and husband Tom of Olympia, Washington as well as several nieces and nephews and numerous family friends.
Celebration of Life Memorial Services will be held Saturday, June 25, 2022, at 10am at First Baptist Church of Pampa, 203 N West St, Pampa, TX 79065, with Zack Greer officiating. The family has entrusted the cremation care of their loved one to Winegeart Funeral Home.
Should donations be a preference, the family requests they be sent to First Baptist Church, 203 N West St, Pampa, TX 79065 or to Pampa Animal Welfare Society (PAWS), 811 S Hobart St, Pampa, TX 79065.