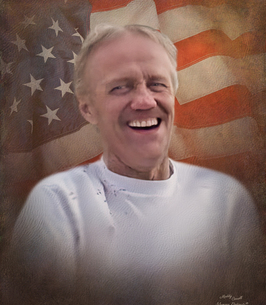 Larry Francis Mastella, of Pampa, Texas, will be celebrating his 65th birthday in Heaven surrounded by angels! After a long, strenuous fight, he peacefully passed away on Friday, March 18, 2022, in Amarillo in the Thomas Creek Veterans Hospital. Larry was born on March 23, 1957, in Boston, Massachusetts to Frank and Emma Mastella.

With Larry’s father being in the military, they moved quite frequently allowing him to see much of the states, eventually settling in Pampa. At the age of 18, Larry joined the United States Navy and proudly served for 4 years from 1976 until 1980. Following his tenure with the Navy, he worked in maintenance at the Mockingbird Apartments in Amarillo for 25 years.

Larry was extremely family oriented. He not only loved his family, but he was also very proud of them and even admired their achievements. Some of his most cherished memories are eating pancakes at his sister’s house or going to the Coney Island with her for pie. Although he wore a small stature, Larry loved to eat! He certainly had a sweet tooth as cake and candy were his absolute favorites.

He had a love for music, especially rock n’ roll and collected records – lots of records; however, it didn’t end there, he also saved dream catchers. But his favorite compilation was of his beloved eagles. He marveled at their majesty and regal beauty. We know you are smiling with your famous thumbs up sign, so go fly high Larry!

His arrival into Heaven was anxiously awaited by his parents, Frank and Emma Mastella as well as his grandparents, aunts, and uncles.

Larry’s charming and infectious smile will be remembered by his sister, Sherry Davis of Pampa; two nieces, Brandie Wallin of Pampa, Melanie Moon and husband Kevin of Amarillo; brother-in-law, George Davis of Pampa; two great-nephews, Andrew Moon, Matthew Moon; two great-great nieces, Kyla Moon , Ryleigh Moon; a great-great-nephew, Lincoln Moon; his only daughter, Jennifer Nagy and husband Matthew; three grandchildren, Luke Nagy, Madison Nagy, Natlie Nagy all of Slidell, Louisiana; his Aunt Brenda Parks of Pampa, as well as many extended family and numerous cousins of one whom he was particularly close to, Kelly Clarke. All those who knew him, will greatly miss his kind and loving heart.

The family would like to extend a very heartfelt “Thank You” to his close friends, Theresa & Tony Teakell and Carolyn & Glenn Jacobs for the love given him and for the many trips to The Plaza you shared with Larry. Also, to the NWTX Hospital staff and the Thomas Creek VA Hospital for the loving attention given to him while he was in your care. And to his very special friend, Katy Wilde, thank you for loving Larry! Last, but certainly not least, special acknowledgment to Pastor Chip Watson and the Soldiers for Christ Fellowship Church for allowing us to celebrate our beloved Larry in your house of worship.

Larry will be available to pay final respects on Monday, March 21, 2022, from 2pm until 8pm and again Tuesday, March 22nd from 9am until 8pm at Winegeart Funeral Home, 303 N. Frost Street, Pampa.

Celebration of Life Funeral Services are scheduled on his birthday, Wednesday, March 23, 2022, at 2:00 p.m., at The Soldiers for Christ Fellowship Church with Pastor Chip Watson officiating. Burial will follow at Memory Gardens Cemetery with Military Honors rendered by the Navy Funeral Honor Detail. The family has entrusted the care of their loved one to Winegeart Funeral Home.

Should donations be a preference, the family suggests they be made to the American Cancer Society, 1300 Summit Avenue, Fort Worth, TX 76102 in honor of Larry.