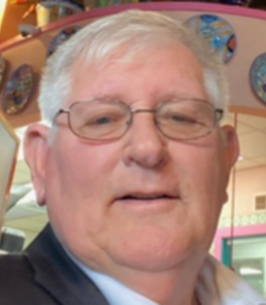 Funeral Services are set for 11:00 A.M., Friday, September 24, 2021, at The Church of Jesus Christ of Latter-day Saints, Azle, Texas under the direction of White’s Funeral Home..

Visitation will be held prior to the services from 10:00 A.M. to service time at the Church.

Graveside Services will be held on Saturday, September 25, 2021, at 10:00 A.M. at Fairview Cemetery in Pampa, Texas under the direction of Winegeart Funeral Home.

He was born on October 28, 1945 to Luther Barnett Nichols, Jr. and Ruth Adaline Marcum in Barksdale Field, Louisiana.

Alfred’s childhood was spent moving through Louisiana, Oklahoma, and Texas, and he was known for always having a smile on his face, even when being marched to the principal’s office. His family finally settled in Pampa, Texas where he spent most of his life. He began working at an early age in various jobs, including at a movie theater where he got the attention of his future wife, Fran Keller, by throwing bits of ice at her and her friends from the projection booth. They were married three years later, and he began his career as a third-generation oilman for Windsor Well Service. He changed careers and began working for Cabot Carbon Black, where he was quickly promoted to a relief operator while also starting to work part-time as an assistant manager at the local Pizza Hut. When the opportunity came to take over as manager, he jumped at the opportunity to better provide for his family. He eventually transitioned management of the restaurant to his wife, allowing him to become a part owner of Top O’ Texas Well Service and C & C Oil. During the big oil bust, he transitioned out of oil and into driving his own truck, eventually working as a long-haul truck driver. He transported cargo all over the country but made sure to route himself to visit his family along the way. In 1998, he settled in Springtown, Texas and most recently worked as an independent driver for Aggregate Hauler in Bridgeport, Texas.

Alfred was honorably discharged from the Army National Guard at the rank of Sergeant. He and his wife are active members of The Church of Jesus Christ of Latter-day Saints in Azle, where he exemplified his Savior by teaching the Primary children. Alfred had a great love for all his family – and he has a lot of family.

He has been reunited in death with his father, mother, father-in-law, Elmer Keller, mother-in-law, Clotteen Redman, and two nephews.

Very loved and will be missed by so many.